How to Deconstruct the White Gaze: Made Visible at The Yard Theatre

In my recent blog, The Oscars, Othello and Ira Aldrige: The Paradox of Race in the Performing Arts, I reflected on the many ironies that underpin the casting of black actors (or lack thereof). Within that discussion, I queried the responsibility of white writers to develop characters and storylines that reflect the diversity of the societies in which we live.

As if on cue, playwright Deborah Pearson has taken up the challenge of exploring how a white writer interprets and articulates the experiences of non-white people in Made Visible at the The Yard Theatre (until 9 April 2016).  Made Visible is a meta drama – a play about the rehearsal of a play.  The main character is Deborah (played by Hayley McGee, not the playwright herself), who is attempting to develop a show about an encounter she had with two women of Indian origin in a park.  However, uncertainty, insecurity and self-doubt come fast and thick as Deborah interrogates her position as a white, middle class person of privilege as she rehearses the play.  Did unconscious racial stereotypes shape Deborah’s interaction with these two Indian women?  How should she characterize their ethnicity in the play?  Do they have to wear Sarees or speak with in an Indian accent despite having lived in the UK for many years?  The two actors hired to play the Indian women in the park challenge Deborah at every turn during the rehearsal.  The actors switch roles as they rehearse, bringing out further complexities and contradictions.  Despite being white and middle class, can Deborah nonetheless relate to the politics of exclusion as a woman?  Should Deborah be writing a story about Indian women when she can’t even pronounce the word Gujarati? 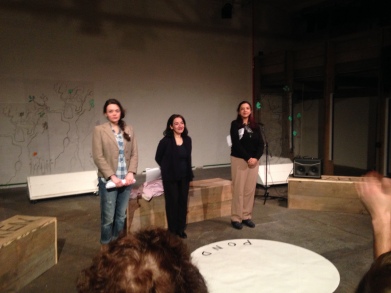 An intriguing piece performed in an intriguing space. The Yard Theatre is a converted warehouse space in Hackney Wick, not far from the Olympic Park.  It opened in 2011 with the mission of giving new writers a space to put on  low-cost shows. The theatre is small, providing an intimate experience that is well suited to works like Made Visible, which breaks the boundary between actor and audience.  I had the opportunity to speak to the The Yard’s Executive Director, Lucy Oliver-Harrison, about the aspirations of the theatre. What I like is her and her team’s commitment to telling the story of East London, the most diverse part of London.  Its location in Queens Yard, with several bars/restaurants/arts venues, is hipster territory for sure. However, it is clear there is an ambition to present works that represent the old and new residents of East London.  Made Visible is ostensibly about a conversation that happens in Victoria Park.  The show that immediately preceded it was Re: Home, which focused on the lives of residents of the Beaumont estate in Leyton.

Theatres like The Yard play an important role in engaging diverse audiences by producing works that are relevant to their lives and, in the process, developing the type of writers who will put the need for campaigns like #OscarsSoWhite to an end.